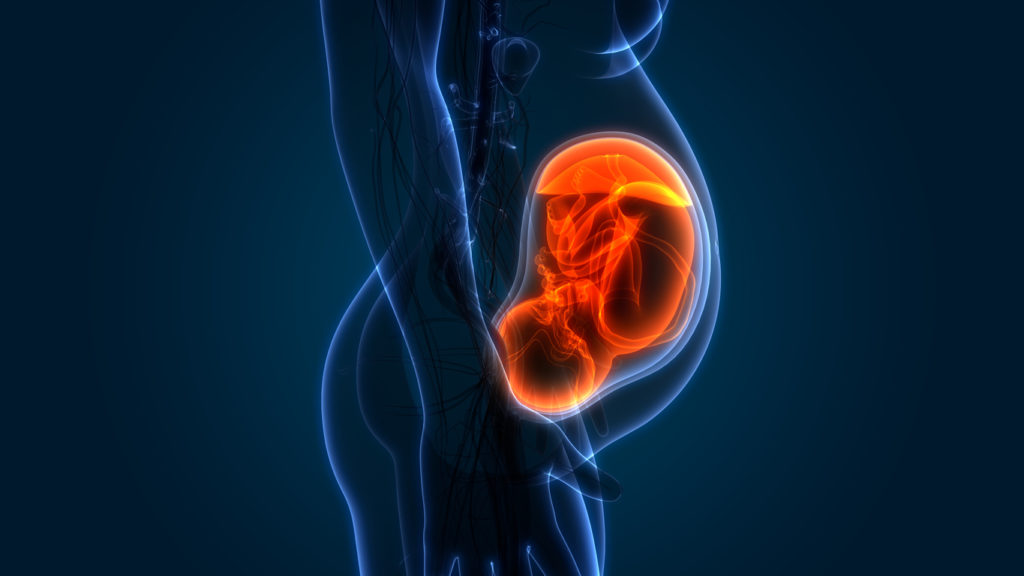 When an egg (ovum) is fertilized with a sperm, the new cell is called a zygote. This quickly begins to divide into more cells, and it keeps dividing as it journeys from the ovary through the fallopian tube and ends up in the uterus.

In the uterus, the fertilized egg attaches itself against the uterine wall in a process called implantation. Occasionally, women notice spotting for a couple of days during this process; by the conclusion of this stage, the endometrium (uterine wall lining) thickens and the cervix is sealed by a plug of mucus as a protective measure for the young embryo.

The little ball of cells is called an embryo until the eighth week, when it becomes a fetus – and it is then called a fetus until birth. During the first month of embryonic development, the amniotic sac forms around the embryo. The sac gradually expands as the fetus grows.

During this same time, the placenta develops into a round organ that passes nutrients from the mother to the embryo. Waste from the embryo will also be expelled this way via the mother’s body. The embryo will begin to develop a primitive face during this first month, with two large dark circles where the eyes are forming.

The mouth and throat are also developing, and circulation begins. By the end of the fourth week, the embryo’s heart will beat roughly 65 times a minute – and the embryo is about a fourth of an inch long.

Second Month of the Embryo Developing

The embryo’s features continue to develop during the second month. Tiny projections are forming that will become arms and legs, and small flaps of skin form on the side of the head. These flaps will become ears.

The hands and feet are forming, and by now the neuro tube including the brain and spinal cord (the central nervous system) is maturing. So is the digestive tract, and so are the sensory organs. In some cases, bone is hardening from cartilage. The head remains abnormally large compared to the body.

The arms, legs, hands, feet, and fingers are now fully formed. The roots of the teeth are already appearing in the jawbone, and the reproductive organs are forming.

The baby is well on its journey to being fully formed. All of its internal organs and systems are in place and will continue to mature. By this point, the baby is approximately 4 inches long and weighs close to an ounce.

Fourth Month of the Baby in the Womb

The baby’s heartbeat is now regular, strong, and fully detectable. Finer points like eyelashes, eyebrows, nails, and even hair is present.

The bones and teeth become denser and stronger at this phase, and the baby can make faces and even suck its thumb. The reproductive organs are now formed, and this can become a moment of contention between parents: One may want to know the gender while the other doesn’t!

Ultrasound at this stage will make these features visible to the technician. By now, the baby is about 6 inches long and weighs a quarter of a pound.

Fifth Month of the Developing Fetus

At this point, the fetus is moving around, kicking and pushing with its hands and feet. The baby’s movements are resultant from its growing muscles, so the baby will start exercising them.

Hair is fully growing on the baby’s head, and its back and shoulders are covered in a soft, down-like hair covering called lanugo. By now the baby is nearly 10 inches long and weighs up to a full pound.

The skin of the developing fetus has now taken on a reddish color, and veins are visible through the baby’s translucent skin. It now has fingerprints, the eyelids can open, and the eyes can now blink. The baby can even get hiccups at this stage.

A baby born at this point – prematurely – can survive and flourish with proper medical care. By this point, the baby weighs about 2 pounds and is about 12 inches long.

Seventh Month of the Fetus Developing

The baby is now growing reserves of baby fat, its hearing is fully developed, and it will change positions as if in a bathtub. Exposure to light, sound, pain, and music can cause the baby to react.

If born now, the developing fetus most likely will survive with little or no intervention. It also measures roughly 14 inches long and weighs up to 4 pounds.

The baby is now adding even more reserves of baby fat, and it is kicking more. The brain goes through a rapid development phase at this point, and most internal structures and organs are nearly fully developed – except the lungs. The baby will now weigh as much as 5 pounds and is 18 inches long.

Ninth Month of the Developing Baby in the Womb

In the final phase, the lungs are fully maturing. The reflexive responses of the baby would be fully formed, and the baby can turn its head and respond to touch.

The baby’s movements have now lessened due to the constructive space of the womb. The baby usually turns its head downward to prepare for delivery, and it is ready to finally make its appearance to the world.

Dr. Paddy Jim Baggot has been practicing obstetrics and gynecology in LA since 1999, and he is proud to serve women of all ages. He loves to nurture and support a healthy pregnancy and a healthy baby for a wonderful future for the family.

Contact us today to schedule an appointment with Dr. Baggot by calling (213) 386-2606, or fill out our appointment request form online. We look forward to seeing you!